5 Cassettes I Shall Brag About

A few weekends ago some dengis thieves decided to break into my car and take my iPod and a few dope DVDs, including, ironically, Do the Right Thing.  And this hat:

Also, they didn’t steal my Conehead. 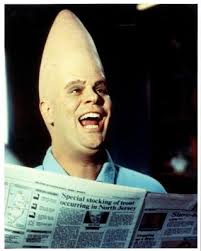 I don’t have enough cash to purchase a new iPod, and since my car only has a tape deck, I’ve dedicated my time to scouring Salvation Armies and thrift stores for semi-obscure cassette tapes, much like Lester Freamon looking for clues on Marlo Stanfield on The Wire.

I’ve found some coolness during my adventuring, but simply finding a dank cassette tape doesn’t always mean it’ll play properly in the deck, actually sound good, or be something worth going back and listening to after one run-thru.

These are the general problems you may encounter when trying to survive the very dangerous used cassette tape racket.  Keep these in mind to avoid disappointment and/or constipation:

Problem #1:  The cassette is plain broke and doesn’t play cuz tapes are kinda easily destructible and age like the entire cast of Jersey Shore, those guys are going to look screwy in five years.

Problem #2:  The cassette is too muffled and creates an aneurysm to form in your temple because that’s not how music should ever sound.

3.  The vocals get too fuzzy when cranked all tha way loud and that’s the only way to play music, as loudly as possible, duh.

Problem #4: After multiple plays, the cassette shits the bed and sounds like it’s playing from underwater by Steve Zissou.

Problem #5: The tape is by a great, seminal group, but it is totally lame, tedious, and unlistenable, and I have to yoink it after a half a listen.

Sadly, I’m going to have to trash those found above or use the art work for a sweet collage I’m gonna call “shit.”

Here are the five cassettes that actually worked and I’ll play, like, 500 times in the next two weeks: The Rolling Stones were the greatest band of the 60’s, besides the period when they tried to sound like the Beatles/Bob Dylan (Lady Jane makes me barf) rather than trying to sound like Howlin’ Wolf and Muddy Waters.  This compilation pretty much takes all their singles and their B-sides from that golden period and they sound super sensational mind-bending great.  And totally bad-ass.  I mean, they are the coolest cats ever, right?

I guess there’s this:

Makes me want to watch:

I didn’t realize how tight a rhythm section Blondie had.  Plus, she’s one of the most attractive women in the history of the world.

When I was in college the local access channel played a Black Flag performance, when they had played the UMass Ballroom in 1984.

Then Lightning Bolt played there the summer after I graduated, at a festival run by my old radio station, and it was the crowning achievement of my life, although I didn’t directly organize it, I hired the people who did…

Long story short, after seeing the Black Flag show that night on public access, remarkably playing one of the sickest sets I’d ever seen, it dawned on me that anything Henry Rollins does in a live setting is a must-purchase.  The guy brings it and has a knack for playing with a nasty band.  This tape is no different.

Minutemen – Double Nickels on the Dime

RIP D Boon.  Ah pity the fool who gave this tape away.

This entry was posted in Uncategorized. Bookmark the permalink.