No Age, Arab on Radar, Lightning Bolt – The one slightly lousy aspect of Baltimore was the heat wave that took over the city during the otherwise brilliant weekend.  Saturday reached record highs in the 103-range.  It was nearly impossible to stand in the sun for more than twenty minutes at a time and not shed five pounds from sweating.  My clothes stuck to me within a half hour of being outside.

I shouldn’t have been surprised that the heat sapped me of all my energy by the time the headliners hit the stage Saturday night.  My plan was to take a break during No Age and then rage out to Arab on Radar and Lightning Bolt.

Unfortunately, none of this worked out.  During No Age’s set I tried re-grouping my body and soul.  I sat in my friend’s car and let the AC blow up my shorts.  That felt good but No Age didn’t sound good from eighty feet away.

When we went back inside, Arab on Radar had already started.  The crowd was way too big to wiggle through and I decided to watch from the back.  They were cool and reminded me of lots of Providence bands that I see on a regular basis so I wasn’t super tortured that I wasn’t in the middle of the chaos.  It was interesting to see where the local scene gets its roots.  This picture is awesome:

I thought I could save all of my energy up for Lightning Bolt’s set.  They always guarantee a tremendously hectic performance.  I pushed my way up to the middle of the crowd as they began ramping up their bass and drums, slowly building up to a big, obscene, noisy explosion.  As their momentum traveled upwards, I gained some of my ambition back, and was feeling the music wave come back to me.

But bassist Brian Gibson had sound problem and took at least fifteen minutes to correct it.  In that time period I slowly lost all of my energy and again had to go in the back and watch from afar.  I felt like Vileplume kept using Megadrain on me:

I was too tired to be too disappointed that I was missing the intensity: I’m spoiled, it was the third LB show of the year for me, since I’m from Providence and all.  I would’ve loved to punch some hipsters in the back while flipping my shit but I didn’t feel like passing out in the middle of the crowd.

Rain and wind destroyed the Day Four Sunday at Whartscape.  Quite literally, in fact.  The makeshift stages were destroyed (see below) and the Wham City crew had to figure out a back-up plan.  The dudes shifted things to the Sonar Club, a normal club, weird considering all the other venues. 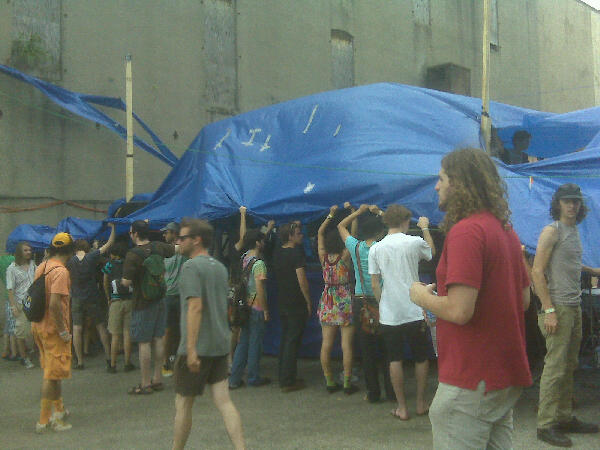 Xiu Xiu canceled which sucked, but I did catch:

Lower Dens – Had Stereolab vibes, I dug them, found out later that Jana Hunter was the lead singer, she’s cool.

Health – The third time I’ve seen these guys in the past year.  I think this was their most glorious set: they only played a half hour and featured their most intense and noisy material, avoiding their more spacey stuff that they featured when I caught them at the Great Scott.  Also, the mosh pit was ridiculous, especially after several delicious Yuenglings.

Again, we headed over to the H&H Building for the final night of Whartscape.  The vibes were way toned down compared to the first two nights of party bedlam.

The top floor featured Oneohtrix Point Never spacing everyone out.

I ran around the buildling a little bit that night, catching the very interesting Living Things on the fourth or fifth floor: xylophone, mini piano, clarinet, weird costumes, kind of a mix of performance art and improvisation.  Blew my mind a bit.

Then I somehow got into the highly anticipated final show of the evening, Future Islands.  I only caught the last three songs but they were masterful and intense and grand.  I remember a few chubby dudes just slapping their bellies and I obviously joined in the debauchery.  The next night, I told the Future Islands lead singer dude, you guys were awesome.  Judging by this photo,, I had a great time in the pit.

Dan Deacon and the Wham City collective deserve all the credit I can muster in three lengthy blog posts for putting on such a wonderful weekend.  Truly the most fun vacation I’ve ever had, the best festival I’ve ever attended, and an overall positive, healthy experience.

From a big picture perspective, Whartscape 2010 is important for these three reasons:

1.  Local music scenes can sometimes be claustrophobic and, let’s face it, clique-y like a high school lunch room.  Baltimore’s friendly and classy residents proved it doesn’t have to be like that.

2.  DIY festivals, although probably shit-tons of tedious work, are so much better than anything else in the world.  Hope Whartscape inspired some ambitious assholes to do their own thang… (I’m raising my hand).

3.  Some dude at Vice Magazine claims rock, as an open frontier, is dead.  I think Whartscape is the other side of that argument, considering the amount of variety and originality found over the four-day weekend.  I felt like I was experiencing the American Dream, in the eyes of smart, hard-working, artsy musicians.

Thanks for reading all my nonsense,